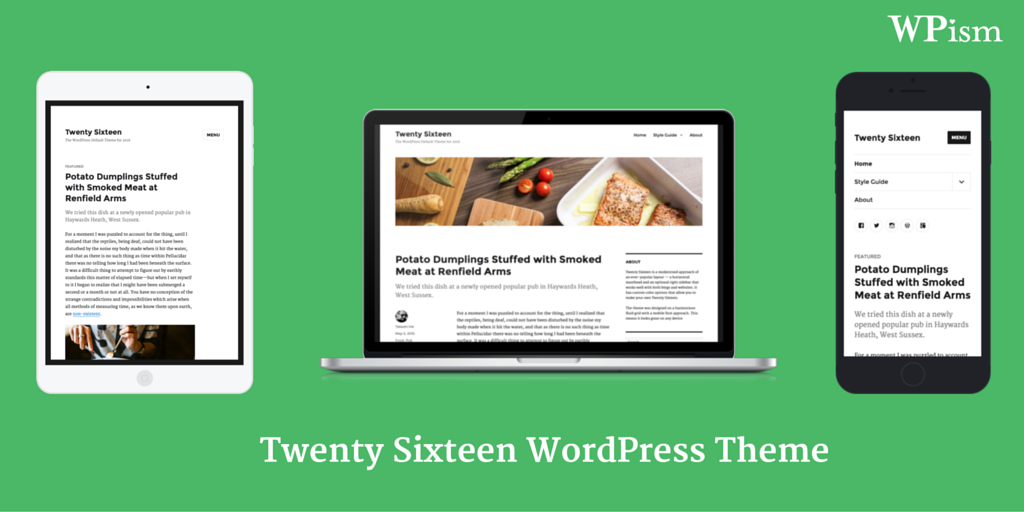 The first preview of the upcoming Twenty Sixteen, a default WordPress Theme for 2016 has been released. Follow this post to see what it looks like and everything you need to know about the default 2016 theme.

WordPress default themes are included with major releases and they are some of the most popular WordPress themes every year.

This post is only about the default WordPress Theme of 2016. You can see more trending WordPress themes of 2016 on ThemeForest here.

Latest Update: WordPress 4.4 has now been released and comes with the Twenty Sixteen default WordPress theme.  See the below-embedded post (another feature in WordPress 4.4) to find out all about the latest version.

Among all the ongoing developments, one that will definitely ship along with the WordPress 4.4 release is the WordPress default theme for 2016
}

Tammie Lister, head of the upcoming default WordPress theme for 2016, introduced Twenty Sixteen in one of the latest WordPress core blogs. Posting several screenshots of the theme, Lister termed Twenty Sixteen as a perfect fit for the default theme of 2016.

Twenty Sixteen features the design of Takashi Irie who was also behind the designs of Twenty Fourteen and Twenty Fifteen default themes. Irie along with Lister will be the core team responsible for the design of the new default WordPress theme.

Designer Takashi Irie introduces the Twenty Sixteen theme in the about section of the demo theme as;

Twenty Sixteen is a modernised approach of an ever-popular layout — a horizontal masthead and an optional right sidebar that works well with both blogs and websites. It has custom color options that allow you to make your own Twenty Sixteen.

The theme was designed on a harmonious fluid grid with a mobile first approach. This means it looks great on any device.

Here’re a few screenshots of the upcoming default theme of 2016. The screenshots have been posted by Tammie Lister and include previews of several possible layouts, custom colours, and different screen sizes.

Alternatively, you can visit this link for a live preview of the theme.

It might be too early to talk about the features, but some of them that stand out to me include,

The final version of the theme will, of course, include several other features and updates incorporating the suggestions from the WordPress community in the upcoming months.

Contributing to the Twenty Sixteen Theme

If you want to contribute to the theme and its release, let the core team know about it in this post. You can also subscribe to the Make WordPress Core blog for updates on the process.

The core theme development team has invited all contributors to join in the weekly meetings every Monday and Friday 16:00 UTC (in #core-themes on Slack), after the initial code of the theme has been committed to the core.

The theme looks clean, simple, and elegant. I really like the minimalistic approach of Twenty Sixteen.

As the theme will be shipping with WordPress 4.4 in 2016, it’s crucial that it should be appealing and easy to get started for the new users of WordPress.

I am sure Twenty Sixteen will be appreciated by many of the new users that will adopt and use WordPress for the first time.

As always, not everyone seems to be happy with the design of Twenty Sixteen. And I think, that’s okay.

Like Lance Willett mentions in this article, the default theme isn’t about being an end-all-be-all theme and that it won’t please everyone.

Apart from the cynical comments of the community, one request, however, sounds convincing to me – the possibility for the community to get involved earlier in the process of choosing design and theme.

As Brian of Post Status adds to the discussion in the core blog, “the process is so different than the rest of the WordPress development”.

What do you think of Twenty Sixteen? I would love to hear your thoughts about the default Twenty Sixteen WordPress theme in the comments below.