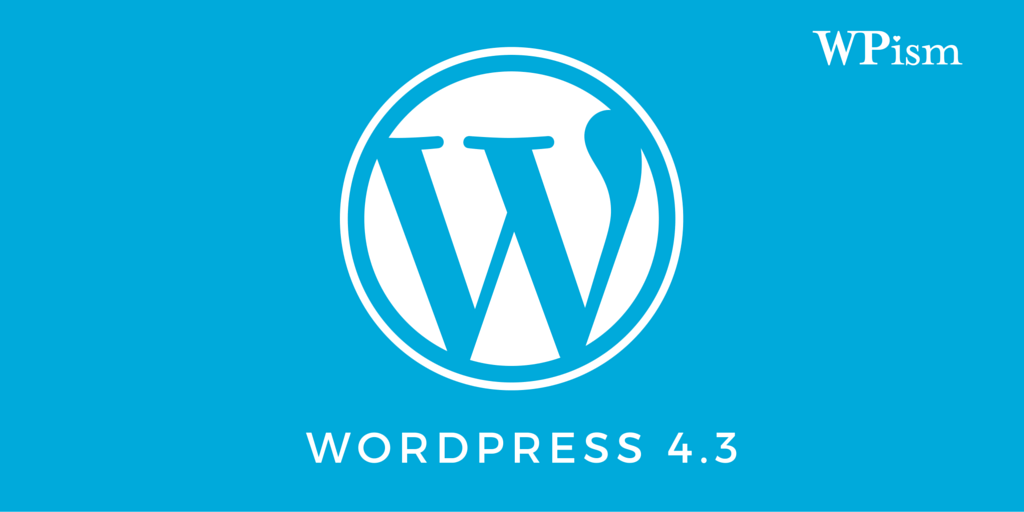 As expected, WordPress 4.3 has shipped on time and is now available to update from your dashboard. The project led by Konstantin Obenland was made possible by 246 contributors.

Now that WordPress 4.3 is available, the first thing you will need to do is update all your WordPress websites to the latest version.

As this is one of the major releases, your site won’t be auto-updated and thus you will manually need to initiate the update process.

(If you use managed WordPress hosting, your hosting provider should’ve updated your WordPress automatically.)

Once you have updated your website, let’s look at all the exciting new features of WordPress 4.3 in detail!

Let me start by introducing the feature that I am most excited about – formatting shortcuts and editor enhancements in WordPress 4.3.

As a website publisher, I spend a significant amount of time formatting and editing posts.

The new features and improvements make my writing flow faster and easier to format with lots of shortcuts. Here’s a short video showing you some notable changes in the editor.

You can view all the keyboard shortcuts by clicking the help button within the editor. Here’re some of the new shortcuts that you might find helpful when writing your next post.

Similar to the markdown style syntax, the following shortcuts will automatically convert into lists or headers.

The following shortcuts will be applied instantly when you start your paragraph with them. You can press backspace to undo this change.

The following shortcuts are applied after you press Enter. You can press Escape or the Undo button to undo this change.

These features also work perfectly on your mobile. Here’s a demo of what it looks like on the mobile version.

Along with other editor enhancements, there’s one more feature that I want to highlight in the new version.

You can easily edit and remove links inside your editor just by clicking on it. A simple toolbar with edit and remove buttons will appear once you click the link that you have inserted.

The toolbar will let you edit or remove URLs without having to open the link modal all the time.

If you keep track of Word Counts in your editor while typing, you will love this improvement that refreshes the count every time you stop typing. Previously, the count was updated when you pressed enter/return to start a new paragraph or sentence.

Additionally, the word count is now more accurate as it excludes more characters that shouldn’t be counted as words. The word count also excludes Shortcodes and HTML comments in the editor.

Customizer is heading to become one of the most prominent features of WordPress. Similar to customizing themes, you can now customize Menus with a live preview of the changes. All the menus and menu location options are now available in the customizer without having to reload the page.

The customizer for menus is really fast as compared to what we saw in the first beta 1 version release of WordPress 4.3, and this feature has seen constant improvements.

Additionally, Weston Ruter, a contributor to this feature, explains that the menus handle fast previews because of the Partial refresh functionality – an “experimental transport” introduced specifically for menus. This might be particularly interesting to developers!

Such functionality with Menus makes them faster unlike other items such as widgets and themes in the customizer.

Although relatively intuitive, you can still use the old menu system if you don’t find this feature comfortable.

The introduction of this feature was highly debated in the WordPress community – another reason the old menu system will still be continued in a few upcoming versions. Hopefully, improvements such as faster previews and continuous iteration of this feature will garner more support from the community.

WordPress 4.3 comes with an improved user interface (UI) for setting passwords. The UI is integrated with both login screens and Add New User screen/password reset screen.

The new version now generates strong passwords that are long, random, and secure by default. You can change the password to something else, but you will need to confirm further the use by checking a tick box if your password turns out to be weak.

You no longer can email passwords to other users. Instead, they will get a password reset link in their email. You can, however, choose to “Show Password” while adding any user and send them the password through alternative methods such as texts or messenger.

Few changes as illustrated in screenshots;

– Long, Random, and Secure Passwords are generated by default

WordPress thus lets you choose secure passwords by default and makes it difficult to choose easy passwords. You can read our previous post or this detailed blog from Mark Jaquith, the lead developer behind the changes for more on the topic.

With WordPress 4.3 you do not need any additional plugins to set your browser icon (favicon).

The feature is now part of the core version, and you can easily set your icon from the customizer settings.

In terms of setting up the favicon, navigate to Appearance > Customize > Site Identity.

Under the site identity options, you have the option to upload your site icon with the following description.

Site Icon: The Site Icon is used as a browser and app icon for your site. Icons must be square, and at least 512px wide and tall.

If a site icon has been set already (possibly using Jetpack’s feature), you would see options such as Remove and Change File just below your icon.

The site icon can be an important part of your site’s identity as it is displayed in the browser icon, bookmark icon, and mobile app icon (touch icon). Also, this feature works for everyone and doesn’t require any theme support.

This might not be a major change but is still an important improvement. Comments are now turned off on pages and custom post types by default, letting you focus on your post’s discussions.

Previously you had to turn off the comments manually below each page. Of course, you will still have options to enable this feature (if you really need to) under the Discussion settings.

When viewing the front-end of your website, you now have a new button – Customize.

This shouldn’t be a surprise, as customizer has clearly become the future of WordPress. The customize link makes it easy to access the options and settings for appearance, widgets, and menus that are now part of the customizer.

Having a separate Customize button has further made the links clearer to the users for Dashboard, Themes, Widgets, and Menus links under the website title.

Again a minor change but this brings enhanced clarity to the toolbar links and resolves the issue of mixing dashboard and customizer links as seen in previous versions.

The mobile view of WordPress has been continuously improved and this version sees improvement for the list table for posts in the admin section.

The improvements now let you see all the columns by simply toggling an icon.

More such improvements are necessary as we see rapid mobile growth and the immediate need to prepare WordPress to work across all screens and devices.

The list view also has some developer specific API changes. See this excellent post from the lead developer Helen Hou-Sandi discussing both UI and API changes.

Few changes that might sound developer-specific but most relevant to the general audience include;

A new template, Singular.php has been added to the WordPress theme hierarchy. The template can be used for any singular post, of any post type. As discussed in this core ticket, the template follows the rules of is_singular and is used for a single post, irrespective of the post type.

Here’s the template as visualized in the WPhierarchy.

Few improvements have been seen in the Multisite version of WordPress 4.3. Jeremy Felt, the lead behind the multisite changes highlights the changes in the core blog here and you can also see the full list of multisite focused changes made in 4.3.

Few changes such as deprecation of PHP 4 style constructors in WordPress 4.3 have been made to support the release of PHP 7 is slated to release later this year (see latest WordPress software requirements here).

WordPress has also been running its unit tests on PHP 7 nightly builds to fully support PHP7 when it gets released.

Other notable changes include;

For more on developer-specific changes, you can check out the Make Core blog that documents all the notes for WordPress 4.3.

Now, please go and update your WordPress blog, if you haven’t done it already. Also, don’t forget to leave any comments on what you think of WordPress 4.3!