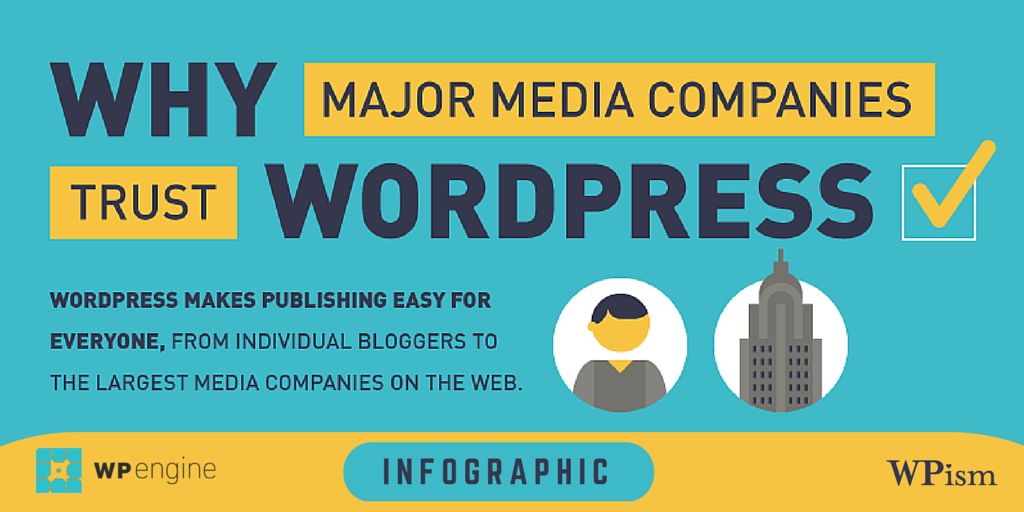 WordPress is the most popular CMS (content management system) that powers more than 60% of the websites whose CMS are known. This accounts for almost a quarter (24.2%) of all the websites that exist today!

As such, WordPress is undoubtedly popular among different sectors but did you know that nearly 1500 of the top news sites use WordPress?

So, today it’s not only the case of WordPress completely dominating top 100 blogs – it has grown over years to power several top media and publishing brands of the World.

As the media industry focus has shifted towards serious online publishing in last few years, many of them have adopted WordPress to power their growing online and digital channels.

As Nicholas Thompson, editor of NewYorker.com that re-launched its WordPress powered website in 2014 puts it;

We’re looking at almost total upside there. It’s a lot easier to be productive now, and we can now make the site fresh a lot more quickly than we used to.

WP Engine is one of the most popular managed WordPress hosting companies that also powers this blog.

As revealed in the infographic, WordPress is popular among major media brands including Reuters, The New York Times, BBC America, The New Yorker, Variety, TechCrunch, Wired, Forbes, and many others.

The infographic doesn’t only showcase the top media companies using WordPress. In fact, it digs deep into why the platform is becoming popular among those major media companies.

WordPress has indeed revolutionised publishing and its easy to use CMS with powerful features are taking over the web.

As seen in the infographic, I have outlined the few features of WordPress that makes it trustworthy to major media companies.

3. Customisation – Availability of thousands of WordPress themes (both free and premium) make it really easy to customise the look of websites.

4. Media Capabilities – WordPress makes it easy to use and embed any kind of media files including Image, Videos, and Audio.

5. Plugins – Plugins are the best way to extend the functionality of WordPress and build on any necessary features. More than 35,000 plugins are available to download from the official plugin directory.

6. Safety and Security – WordPress has been long criticised for security but this has changed in recent years. Automatic and frequent updates keep WordPress secure and safe.

7. Mobile Compatibility – As the mobile growth surges, responsive WordPress designs have made it possible to keep up with the trend. There are also WordPress mobile apps that fully integrate with the self-hosted WordPress websites.

8. Multilingual Convenience – WordPress multilingual focus has made it available in almost 40 languages and this is increasing with wider participation from the community. Global media companies using different languages can hugely benefit from this.

9. Timesaving – Automatic features such as scheduled posts are efficient and really useful for media companies that try to maintain a publishing schedule.

10. Multi-User Compatibility – The ability to assign different roles within WordPress such as Editor, Author, Admin, and Super Admin all help in maintaining teamwork for a brand.

11. Continuous Improvement – WordPress is continuously improved with latest updates and contribution from its vibrant community. (WordPress has come a long way – Release of upcoming version 4.3 has been scheduled for 18th August 2015.)

It’s indeed great to see WordPress be part of an industry whose revenues are predicted to rise 5.1% over the coming five years (2015-2019)!

Use of WordPress will undoubtedly rise across several enterprise sectors and industries in upcoming years.